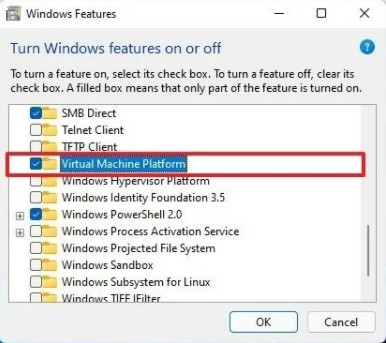 I was working on a case where the customer wanted to enable the Windows optional feature “Virtual Machine Platform”. This is something you cannot find in settings catalog. So I needed to develop a custom solution for this case. This is a perfect example where we can use Proactive remediations in Endpoint analytics. We simply detect if the windows optional feature is installed, if not then install it.

The script simply runs the built in command Get-WindowsOptionalFeature. This command will detect if the specified Windows Optional feature is installed or not. If the Windows Optional feature already is installed, it will return an Exit Code of “0”. If the feature is not installed, it will return Exit Code “1” A nice thing to do is also to return a message with the write-host command. This message will be shown in the MEM console.

If the detection script return an exit code of 1, the remediation script will run. This script simply enables the Windows Optional Feature and returns the result.

The next part is to deploy the Proactive Remediation scripts with Intune.

Monitor the results in MEM portal

Now we can monitor the deployment in the MEM portal. And the monitoring is really nice and useful.

The columns are a bit short in the table, but if you open up the “review” you can see the complete returned value:

As I mentioned before, don´t run to heavy scripts. Make sure you don´t overload your endpoints with detections and remediations that use lots of CPU or memory.

In this small example above, I started to look for additional ways of detecting Windows Optional Features. I found a way that was in fact three times as fast as the above one. By using WMI and the class Win32_optionalfeature, I managed to optimize detection from 0.33 seconds to 0.11 seconds.

So the optimized detection script now look like this instead:

Tags: Endpoint ManagerWindows for IT